To The Point – The Value Of Information

Home/Articles/To The Point – The Value Of Information
Previous Next

To The Point – The Value Of Information

Not long ago, I had the pleasure of meeting Tom McCausland, president of Siemens Medical Solutions USA (Malvern, Pa). I asked him about trends in imaging and the future of the industry, and he was quick to speak on the importance and value of information. “Images are information, and that must be coupled with other information,” he said. “Then, the information must be fused with technology to create electronic records that provide real-time information management. In doing so, we can make faster diagnoses.” 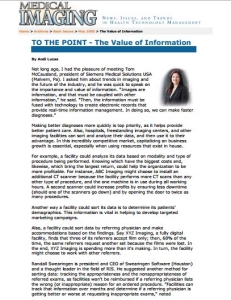 Making better diagnoses more quickly is top priority, as it helps provide better patient care. Also, hospitals, freestanding imaging centers, and other imaging facilities can sort and analyze their data, and then use it to their advantage. In this incredibly competitive market, capitalizing on business growth is essential, especially when using resources that exist in house.

For example, a facility could analyze its data based on modality and type of procedure being performed. Knowing which have the biggest costs and, likewise, which bring the largest return, could help the organization to be more profitable. For instance, ABC Imaging might choose to install an additional CT scanner because the facility performs more CT scans than any other type of procedure, and the one machine is in use during all working hours. A second scanner could increase profits by ensuring less downtime (should one of the scanners go down) and by opening the door to twice as many procedures.

Another way a facility could sort its data is to determine its patients’ demographics. This information is vital in helping to develop targeted marketing campaigns.

Also, a facility could sort data by referring physician and make accommodations based on the findings. Say XYZ Imaging, a fully digital facility, finds that three of its referrers accept film only; then, 60% of the time, the same referrers request another set because the films were lost. In the end, XYZ Imaging is spending more than it’s making. In turn, the facility might choose to work with other referrers.

Randall Swearingen is president and CEO of Swearingen Software (Houston) and a thought leader in the field of RIS. He suggested another method for sorting data: tracking the appropriateness and the nonappropriateness of referred exams, as facilities won’t be reimbursed if a referring physician lists the wrong (or inappropriate) reason for an ordered procedure. “Facilities can track that information over months and determine if a referring physician is getting better or worse at requesting inappropriate exams,” noted Swearingen, who was attending a user’s group meeting about this very topic when I chatted with him. He said that these reports and data analysis is invaluable to RIS users. “The more detail we give them,” he said, “the more detail they realize they need, and the deeper they want to mine the data.”

All of this valuable information—which your facility can use to grow as well as make smarter purchasing and expansion decisions—is at your fingertips and, essentially, it doesn’t cost you a thing. Being able to extrapolate the necessary information from the existing data is key to survival in this competitive market.